Theth Albania is a wonderful village in northern Albania’s Shkodra region. Set among the peaks of the Shala mountains, Theth is isolated, and in times of snow, practically inaccessible.
Theth also has the best example of fortified medieval tower house or kulla along the road of the Peaks of the Balkans Trail. The distinctive tower houses, once common across Northern Albania, provided refuge during conflicts including when someone had committed murder.
The most striking mountain peaks and passes (moving clockwise from the north) are: the peak of Jezerca, which is Albania’s highest peak, lying just outside the park at the north of the valley (2679 m high), followed by Peja Pass (1776 m), the Dry Peak (2543 m), the pass of Lugu i Valit, the saddle of Zhapora, the peaks of Papluka (2569m) and Alije (2471m), the saddle of Valbona (1876 m) and Mt Valbona (1966 m) at the east, the wooded Mt Zorgji at the south (1663 m), Mt Arapi (2217 m), Mt Boshi (2415 m), Shtegu i Dhenve (‘Goat’s Track’, 2104 m), and Mt Radohima (2567 m) at the west. 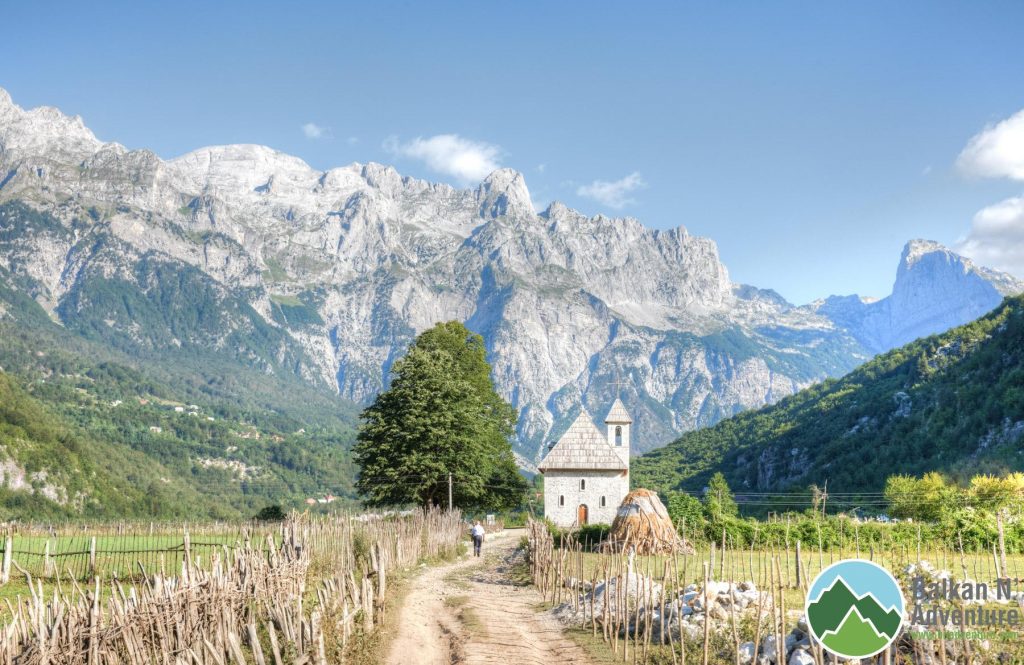 Almost two thirds of the park are covered in trees; in many places, the steep wooded terrain is so inaccessible to humans as to be considered ‘primeval forest’.
The area is crossed by a water network that flows from both eastern and western slopes in the valley. The River Theth rises from several different sources and streams above Okol. The direction of the flow is from the north to the south. In heavy rains it is prone to a sudden and violent swelling, destroying crossing points and fords. Perhaps most famous is the gorge of Grunas Canyon, standing 40 m tall and just one meter wide.
Visitors can look down into the canyon from a wooden bridge. The temperatures range from +20? C to +26? C in June and go down to -14? C and -20? C in the freezing winters. The snow stands more on the slopes, largely in the western part where the sun falls less during the day.