Albania and Kosovo in 8 days

From ancient cities monuments, tower houses and strongholds to fascinating museums, squares and parks, there are plenty of things to see and do in this Albania & Kosovo tour that’ll keep you entertained for days.

Albania – is an amazing country, and one of the best things about travelling to the land of the eagles is that wherever you go, you are going to be welcomed by the locals. This tour will immerse you into the local traditions of the country.

Kosovo – this small and unspoiled country has plenty of things to offer. And what makes it even a more attractive destination to visit is that everything around feels just real, not made for tourists! Nature is beautiful, people are friendly and hospitable, and the fact that it’s quite unexplored makes it a lot more exciting to explore!

First, a private transfer will be arranged to pick you up at the airport at your arrival and take you at your accommodation. Secondly, after a short break you will continue to a trip around the city. As you will might not be able to see everything in a day, you will visit a part of the city and continue with the rest on the next day.

Tirana, the capital city of Albania it is mostly known for its architecture which is affected by different eras such as Ottoman, Fascist and Soviet era. You will start the tour with the National Museum that holds the most important pieces of the Albanian history. From the museum you will continue to Skenderbg Square, Orthodox Cathedral, Villa of Enver Hoxha, The Main Boulevard of National Heroes and The New Market (Pazari i Ri).

This day after breakfast, you will start with visiting the rest of the city of Tirane. You will drive for about 15 mins to BUNK’ART which is a museum located inside an atomic bunker. They built it during the communist regime. Afterwards you will continue to Kruje which is a charming medieval village, beautifully situated among mountainous peaks and the green valley stretching all the way down to the Adriatic coast. Kruja, once inhabited by the ancient tribe of Illyrians, besides its natural charm, boasts an enormous historical importance. You will visit the Kruja castle, perched above the city of the same name. After the visit you will return to Tirana.

Day 3: Gjirokaster, the city of stone

This day we will drive toward Gjirokastra, the City of Stone, so-called because the old houses have roofs covered with flat dressed stones. The city gained the status of “museum town” and it is a proud UNESCO World Heritage site. Visit the medieval bazaar and the Ottoman-style houses in the old part of the town, Skenduli House and Gjirokasta castle which is stands on top of a hill overlooking the city and is one of the biggest in the Balkans. A monument to nearly two thousand years of Albanian history, this castle is one of the most visited places in Albania as for centuries this castle has been witnessing to the long and ruthless journey of Albanian people’s struggle for independence.

Right after breakfast you will leave in direction of Apollonia Archaeological Park which has been preserved in an exceptionally intact condition and holds a successful combination between the beauty of monuments and nature, attractive through its long history, in an atmosphere of relaxation and serenity.  This archaeological park also contains a Museum of Archaeology that stands at the old Monastery of Saint Mary.

Durres is your next destination, the most ancient city in Albania. The city is known for its huge Roman amphitheater, being the largest one in the Balkan Peninsula with once having a capacity of 20,000 people.
You can also see the bathhouses of the 2nd century A.D. and the nearby Byzantine forum of the 5th-6th century with marble columns. One-third of the original wall of the city castle is still standing, and you can even walk along the same road that Caesar himself once strolled. In addition to its historical value, Durres is also a beautiful place to take a break, due to its sandy beaches.
Next destination is Shkoder, where we will also spend the night.

Day 5: Shkoder, one of the oldest cities in the country

Your tour will start with Shkodra city visit. Beautiful buildings surround the city center. Some of them are so colorful that light up the whole atmosphere. Small bars with different kinds of designs make you fall in love with the place. On the main pedestrian we will stop at Marubi Museum. This museum has the first picture taken in Albania. Furthermore, there you will find nearly 500 thousand photographs from the Marubi’s dynasty. The museum also holds photography objects and cameras used for three generations.

When the visit at the museum is finish, we can choose whether you like visit the factory where the Venetian carnival masks are made or a small artisan factory that makes different traditional things from silk, cotton and wool for 5 generations.

After, we drive to Rozafa Castle. It represents the main sightseeing in Shkoder. It raises on a rocky hill 130 meters above sea level. The castle was built during antiquity and endures the Roman and Ottoman Empires. It has three main courtyards. There you can see the Illyrian Wall, Sultan Mehmet Fatih Mosque which was the Church of St. Stephen once and some medieval ruins. Rivers Kir, Buna and Drin join in the third courtyard.

Our next destination will be Shiroka. While walking beside the lake you can do some birdwatching. Shiroka has a lot of bird species like pelicans, whistles and many more. Also, there you will you can have lunch enjoying the lake view.

This will also be our final destination in Albania before heading to Kosovo. Overnight in Prizren, Kosovo.

This trip will take you through some of the top cultural and natural spots of Kosovo. The trip can be a cultural voyage to Kosovo’s rich multicultural heritage, both ethnically and religiously.

You will start with visiting Prizren, one of the oldest cities in Kosovo. It contains holy sites for Muslims, Orthodox Christians and Catholics, making it a key Kosovo religious city. Many people consider Prizren to be a capital of cultural Kosovo -both contemporary and ancient. This blend of the old and the new makes it one of the must-see stops while visiting Kosovo.

After the Prizren tour, private transfer will take you for a short tour of wine tasting. Rahovec is the wine region of Kosovo. The family that owns Eko Winery has produced wine in the valley since the 16th century. After, you will continue to Gjakova city.

Gjakova was one of the largest trading cities in the Ottoman period and still boasts one of the largest Ottoman bazaars in the world. The Hadum mosque, built in 1594 still has its library and ancient graveyard.  The Sheh Emini Teqe (temple) was built in the 18th century. The Emini family is a sect of Shi’a muslims. Inside this Teqe you’ll see original worship rooms and the family’s turbe (tomb).

On our way to Peja, we will stop to visit the Decan Monastery, built in 1327, a key part of Kosovo religious life and one of the most ancient and pristine churches in Serbian Orthodoxy, and the 300 years old, Ose Osmanaj Kulla in Isniq. This is an example of the family Kulla (or tower) found in the Dukagjin part of Kosovo. This unique piece of architecture provided a meeting place for families and communities.

First, you will take a tour around the city of Peje. The city is most famous for being the seat of the Serb Orthodox Patriarchate and for Serbs, Peja is seen as the spiritual seat of the Serbian nation. Albanians on the other hand cherish Peja as an important Ottoman trading town and home to Haxhi Zeka, a charismatic leader of the Albanian national movement in the late 19th century.

Continuing  with a visit to the Adem Jashari memorial complex in Skenderaj. The complex honors the founder of the Kosovo Liberation Army whose family’s sacrifice helped bring the fight for independence and resolute in a higher level. Get an insight to the divided city of Mitrovica with a visit to the Peace Bridge that links predominantly Albanian and Serbian sides together. Mitrovica, like all cities in Kosovo, is safe for visitors.

We will finish off with a visit to the capital of Kosovo, Prishtina city. The Prishtina City tour starts at the Newborn monument in the city center. It was built to celebrate the independence day of Kosovo in 2008. First it was a bright yellow and every year during the independence they give it a new theme representing issues and priorities of Kosovo. Across the street is the Heroinat (Heroines) Monument. It is build to honor the women experienced rape and violence during the war.

Not far from there, you will continue to Skenderbeg Square. Next, you go to the National Library. It was once names as one of the “ugliest buildings in the world”. Now it has the love it deserves as a part of Cultural Kosovo. The day ends with visiting Bazaar Mosque, the bazaar itself and Kosovo Museum.

After you finish the tour, you will continue to your accommodation in Prishtina.

This day your trip comes to an end. Depending on the departure time and if time promises, you’ll visit the Graçanica Monastery, one of the oldest buildings in the Kosovo religious sphere.

Private transfer will be arranged to take you to the Airport for the flight back. 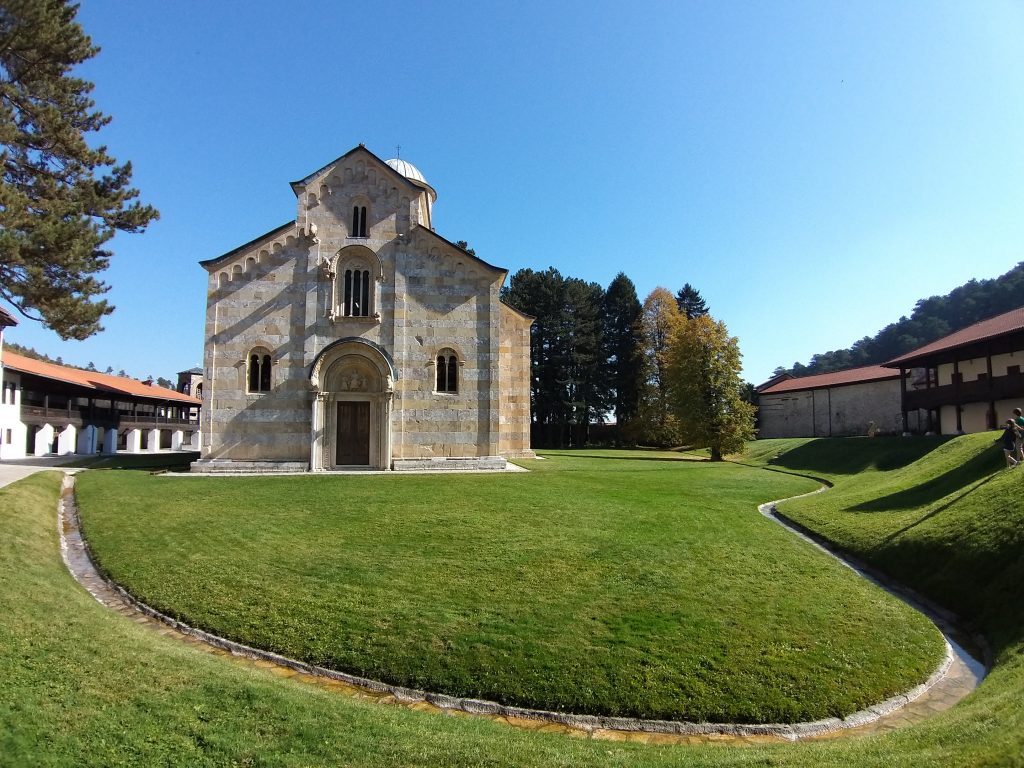