Curiosity may make you visit Kosovo, but the country’s majestic beauty and unparalleled hospitality will make you wonder why it’s taken you so long to visit!

Though it is possible to cross the small diamond-shaped country in just three to four hours at any point, its size does not reflect the diversity of experiences that Kosovo has to offer: from a variety of medieval and Ottoman-era architecture to mountain adventures to unforgettable homemade cuisine, find this in Western Kosovo cultural trail .

No visit to Kosovo is complete without exploring the capital of Prishtina – a vibrant young city with some quirky architecture. Among the city’s highlights are the powerful Newborn monument to the country’s post-war rebirth, the modern Mother Teresa Cathedral, the intriguing Ethnographic Museum, and a giant statue of American president Bill Clinton. See for yourself whether you would classify the country’s National Library as one of the world’s ugliest buildings – so named by The Telegraph. Make sure to take part in the city’s famed cafe culture before heading off to major sites nearby like Gracanica Monastery (a UNESCO World Heritage Site) and the ancient Roman ruins of Ulpiana.

As you head west from Prishtina, you will reach the city of Peja (Pe? in Serbian) and start your visit along Kosovo’s best 80 kilometers: the road from Peja/Pec to Prizren, which boasts three UNESCO-protected treasures as well as many other cultural and natural gems. 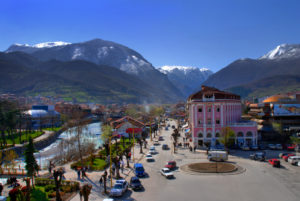 Kosovo’s second most visited city, Peja/Pec is home to the breathtaking Rugova Valley – part of the Accursed Mountains that form the country’s border with Montenegro and part of its border with Albania. As such, Peja/Pe? is known as the country’s adventure paradise, with a variety of excursions available, including: hiking, biking, via ferrata, zipline, caving, and much more. In between outdoor adventures, be sure to make time to take in some of the city’s great multi-cultural heritage – like the medieval Orthodox monastery known as the Patriarchate of Pe? and the striking Qashi Mosque – as well as its distinctive mountain cuisine (especially the qebap, or Balkan meatballs).

As you begin your journey towards Prizren, your first stop should be in the village of Isniq to experience the famed hospitality of a traditional Albanian kulla. During Ottoman times, these stone houses were maintained by prominent families and served as the center of community life. Today, the kulla of the Osdautaj family has been restored to welcome visitors. In this rare four-storey kulla, the family will serve you lunch in the Oda – a room traditionally used for community meetings and welcoming guests – and explain the other functions of the house.

From there, you should continue your journey to the Serbian village of Decan and the UNESCO-protected 14 th century Visoki Decani Orthodox Monastery. If arranged in advance, one of the monks can offer you a tour of the monastery’s architecture and history, as well as a taste of the excellent wine and grape brandy (rakija) that the monks produce.

Continue your journey to the town of Junik, where you can visit the newly constructed Shia Dervish Temple (or tekke) – one of the largest in the Balkans – or the modest Qoku Mosque, which is considered one of Kosovo’s first. This village is also the starting point should you wish to climb Gjeravica, Kosovo’s highest mountain (2634 meters). 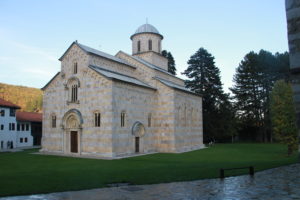 On your way towards the city of Gjakova, you will pass by the 16 th century Terzi Bridge, still standing next to its modern replacement to the modern one. In Gjakova, you will have the opportunity to visit one of Kosovo’s greatest jewels of Islamic art: the Hadumi Mosque. Famed Ottoman architect Sinan, who built Bosnia’s Mostar Bridge and Istanbul’s largest mosque – Suleymanliye – also left his mark on Gjakova. Built in 1594, the mosque is located near the famous Hani Haracise Inn in the heart of the city’s old bazaar and is noted for its excellent acoustics. As you continue out of Gjakova, you would be wise to make a slight detour to the rolling hills of Rahovec – Kosovo’s wine region. As you turn off from your path along the banks of the Drini River. the first winery you will come to is Kosovo’s biggest – StoneCastle – which has a production capacity of 30 million liters of wine per year. With prior appointments, you can enjoy a tasting here and at some of the region’s smaller wineries, offering a variety of wines from the region’s staple Vranac to some creative blends.

No doubt full of wine and great food, continue on for the final 28-kilometer stretch to Kosovo’s “Little Istanbul,” the Ottoman city of Prizren. One of the few cities that was not devastated during the conflict, Prizren retains much of its multi-ethnic heritage, including a Byzantine-era fortress and the 17th century Sinan Pasha Mosque, which shares a road with both Catholic and Orthodox churches. You can close your whirlwind tour of Kosovo by sipping a local Birra Peja at one of the many cafes along the banks of the Lumbardh River, overlooking the historic 15 th century Old Stone Bridge.