This is the trail of Albanian gems that will kill every prejudice against Albania that one may have!

Best season is February to April, November to October

Visit the city described by a Man Booker Prize Winner like this:

“It was a steep city, perhaps the steepest in the world, defying the laws of architecture and city planning. The top of one house might graze the foundation of another, and it was surely the only place in the world where if you slipped and fell on the street, you might well land on the roof of a house – a peculiarity known most intimately by drunks”.

This is the hike of Zagori valley that takes you to Permet, and the Albanian jewel: Gjirokastra. You will be in the middle of mountains meadows and valleys, hiking between 300 and 1400 meters altitude. You will meet genuine hosts and sleep in the stone houses next to fresco covered walls of many churches dotting the landscape.

This is a Hidden Albanian gem!

This day depending on your means of transport in Albania will be organized to get most of the day.

Peshtan is a small village at the beginning of Zagori valley. Though small, it is a place of a big battle between of the Greco Italian war, with pieces of WWII relicts still found. Mira will welcome you to the guest house holding the same name.

From Peshtan you will start the 10 k walk to Limara. On this trail, you will see yourself at the top of the stone bridge over the river of Deshnica built by Ali Pashe Tepelena. A famous Albanian leader fought the ottomans in the middle ages. He had built 6 of these bridges, and only two survived.

The trail is fairly easy with small ascends and descends. Most of the path will take you through narrow passes in between thick Mediterranean vegetation and forests. You may feel at times that you are walking in a green tunnel.

The walk is dotted with ruins from antic times when Illyrians and Hellenic tribes ruled this part of the world. The view is mostly toward the valley of the river Deshnica. During the whole course, you will be under the peak of Strakavec rising above 2000 meters.

After 5 to 6 hours and the last push of a small ascend you will arrive at Limara village. There, Nol also the village teacher will host you in his guest house. 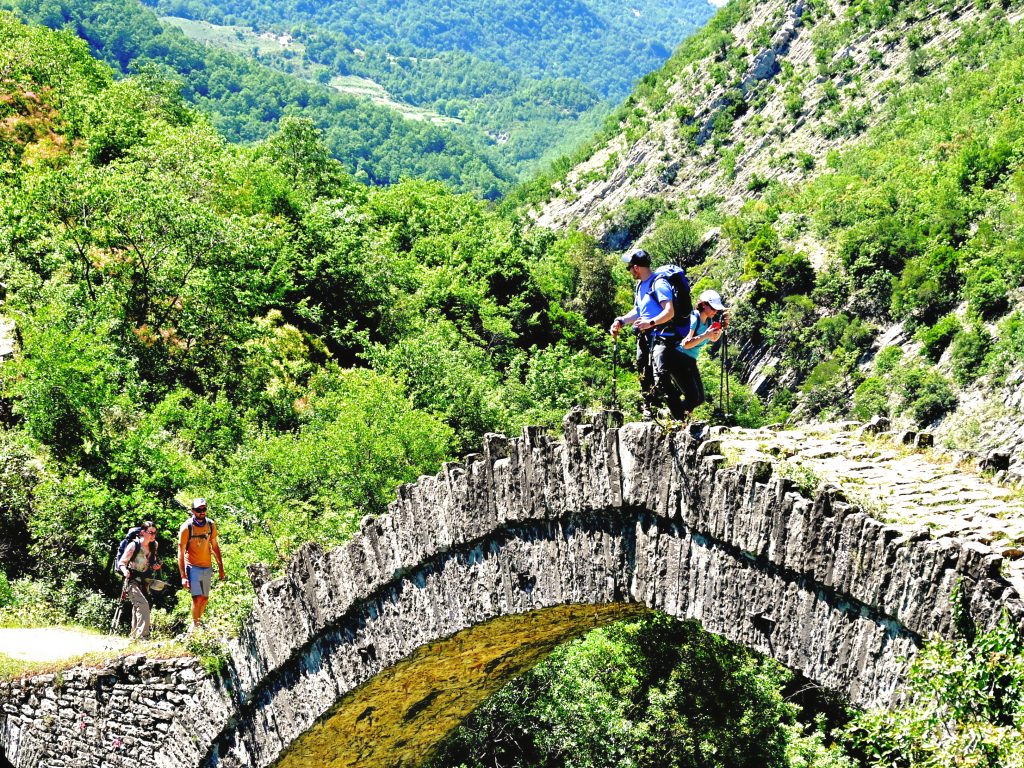 In Limara the time has stayed still. Here Nol is the local teacher guest house owner and guide. In this time-frozen village, you will be surrounded by three peaks: the famous Strakavec, Hormova, and Sheshi Malit massive. You will be among stone houses a short distance from the fresco-covered Orthodox Church. The church belongs to the Albanian Autocefalious Church recognized as independent from the Greek Church in the early 20th century.

From Limara you will hike to Hoshteva. The trail will place you in the middle of beech and oak forests,  fields, and meadows filled with colorful flowers. In difference from the first day, this route is not clear as it is seldom used. As you progress the Strakavec peak will be left behind, while on your left in the northeast you will see the Dhembeli massive. The strange name of Dhembeli means toothy, as the shape of the peaks looks like a line of teeth. You can freshen up by dipping your feet in cool stream water while enjoying a picnic. The trail takes you through an almost deserted village of Deshnice.

The village of Hoshteva your next stop will appear some 500 meters before the arrival. Hoshteva is a Limara with a bigger church and amazing icons. In Hoshteva you will be hosted at Katarina’s guest house. 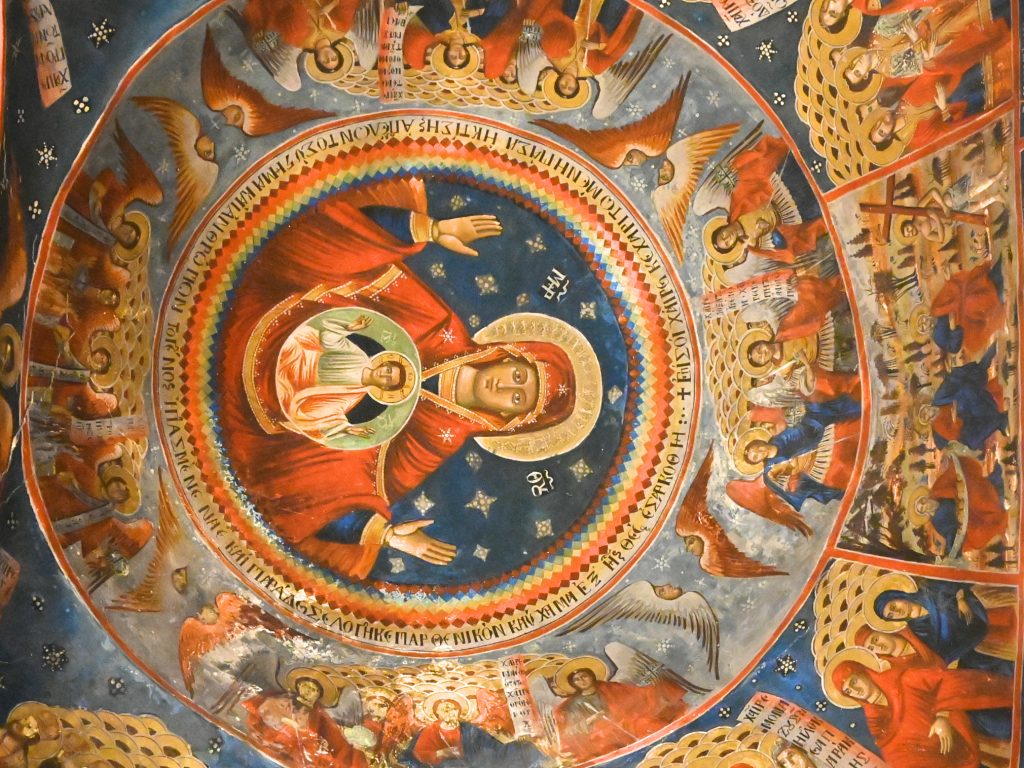 Hoshteva is famous for its church of Saint Apostles, one of the top hidden Albanian gems. You can visit the church and feel the cool coming from stones while you emerge yourself within the icons depicting Christian saints. In difference from the modest guest houses before Hoshteva offers a bigger investment of the Albanian Diaspora in the US.

The highlight of the village is the arched church with colorful icons dominated by the byzantine arches and round ceilings. You can visit on the day of arrival or just before starting your next hike.

The trail from Hoshteva goes to the next stop, Sheper. On this trail, you will see many a monument marking the timeline of Albanian history and diversity. The amazing natural views of this section are mixed with roundy lines of Orthodox Churches and block-like social realist monuments marking the fight against fascists in World War II. On the way, the inevitable stop is the St. Michael Monastery. The Albanian Government is renovating this currently deserted monastery. The coolness of the stone walls is always welcomed in a warm hike. As you continue toward Permet, you have now left the Dhembeli mountains and you are approaching Hormova in direction of Shepër. The first part of this trail is even more remote and less obvious while the second goes through villages. You will see the larger village of Sheper from the middle of the hike, as it sits hidden in the mountains of Zagori. 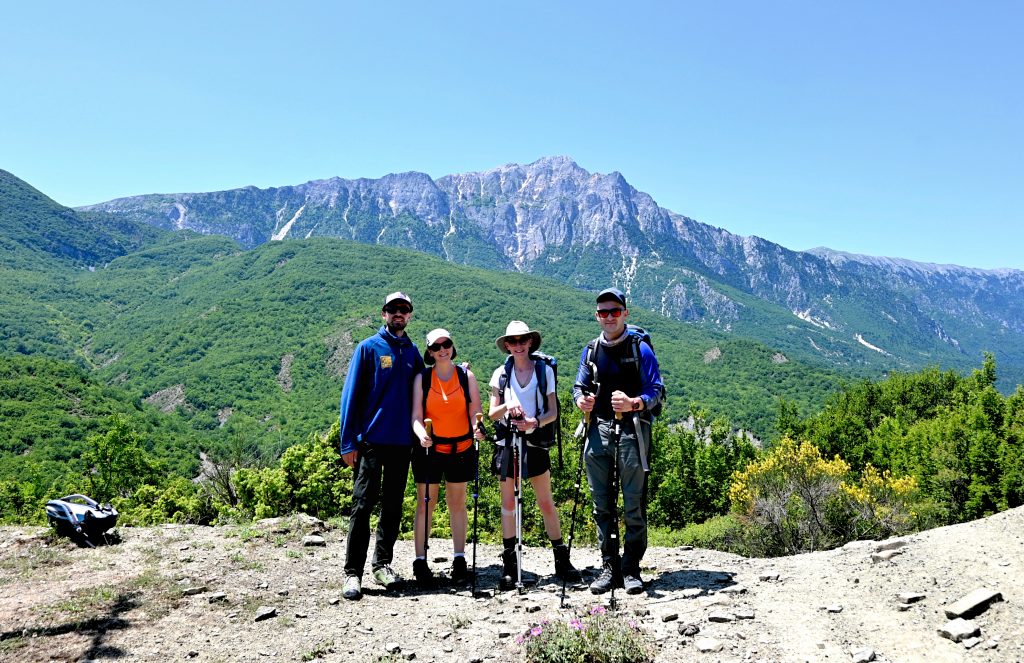 Sheper is the biggest village along the trail. It, of course, hosts a church, and it sits at 800 meters altitude, which makes it the highest village in the region. Sheper rests next to the Dhembel pass that divides the Zagori valley from Permet. The AED guest house in Sheper is newly renovated while preserving the ancient look outside.

On this day, in front of you will have what is considered by some the best hike in the region. The trail connects two valleys and goes through Dhembel passing 1468 meters at altitude. You will climb for 660 meters to the vast meadows filled with vegetation that have fed sheep and goats for many centuries. You can sit there and imagine how even before Christ many Illyrian shepherds have grown their lamb here, playing musing in a flute.

The view from the pass offers a panorama of Permet and Zagori valley. After enjoying your view and the atmosphere you will start your descent toward Permet. The descent is 1200 meters altitude, which offers a great panorama worth the rocky trail. On the way, the village of Leuse offers a nice stop and another fresco-covered orthodox Church.

Visitors resting next to Sotira Waterfall

Permet is a real Albanian gem one of the main cities in southeast Albania was famous for its partisan movement during World War II. It is home to the Vjosa River and many other streams coming from different mountains that nest this jewel.

This is a day of fun and relaxation. It includes bathing in Benjat e Permetit, a natural spa with the view in the mountains. The water source is warm and the surroundings magical. Before or after the spa a walk in the canyon of Lengarica canyon will offer a unique walk with amazing views. Once you emerge in the clear war water coming from the source you will not want to go out. 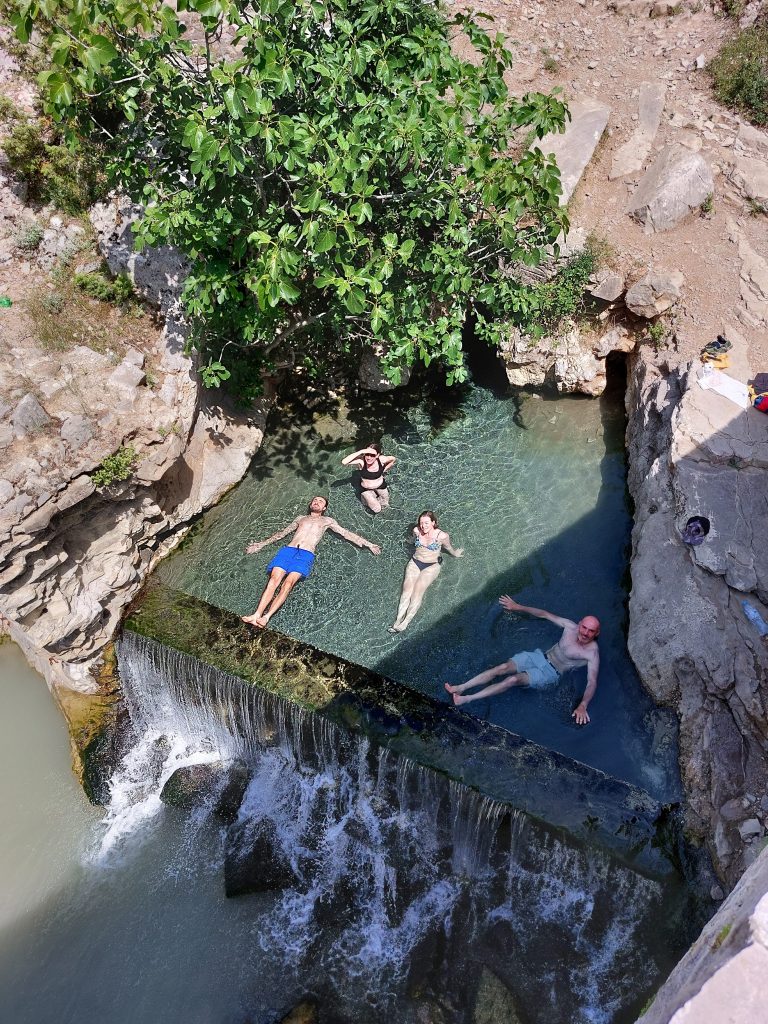 Gjirokastra is the jewel of South Albania featured in several books of the best-known Albanian writer Ismail Kadare. In his book, Chronicles in Stone Gjirokastra was described as perhaps the steepest city in the world. Where “You can walk down the street, stretch out your arm, and hang your hat on a minaret. Many things in it were simply bizarre, and others seemed to belong in a dream.

The stone pavements and the overlooking castle, create a special atmosphere. The city is under UNESCO protection and the status of City Museum. Gjirokastriot or the people who come from Gjirokastra are very proud of their city. Their food is also a special mix of meat, vegetables, and dairy products all produced in the rich valley with a good climate surrounded by the mountains.

The cultural tour of Gjirokastra will give you an insight into the history of South Albania or the Tosk.