October 2018 – hike Peaks of the Balkans

This is an old page – contact us for your tour virtyt@bnadventure.com

October hike Peaks of the Balkans is a spcial offer for October peaks of the Balkans for a weeklong hike Sunday to Sunday. If you are flying from the UK there is a direct link to Podgorica which makes everything easier. This si an epical hike stil a secret in Europe. The group will be smaller than six people the start is guaranteed.

Arrival to Podgorica or Tirana airport – transfer to Theth.

Today you will do one of Albania’s most iconic hikes from Theth (745 m) over the Valbona Pass (1759 m) to the town of Valbona (995 m) in the heart of the eponymous national park. This 14-kilometer route follows the path of an ancient mule track linking the tribal regions of Shala and Nikaj. The hike goes through a narrow crest that gives a view in both of the valleys and it the most southern glacier in the world. After a difficult ascent, you will walk slowly in the track to get to the village of Valbona.
You will be walking between the catholic valley of Shala and the Muslim valley of Valbona. The Albanian Catholics are descendants of pro Venetian Albanians living in the city of Shkodra. These are the most southern Roman Catholics in Europe as the divide between the Orthodoxy and Roman Catholics is Croatia. The Albanian catholic tribes have moved to these mountains to preserve their religion from the ottoman rule.

This trail will go next to Kollata Keqe or Zla Kolata peak which is the highest peak of Montenegro. This trail has been opened later as the usual Valbona Cerrem trail is mostly a tractor trail offering very little. This is one of the best hikes in the Peaks of the Balkans trail, and if you include Gjeravica during your hike you can win two trophies from your trip (Highest of Kosovo and Highest of Montenegro). Part of the hike is quite steep and will take you to the rocky platou where you can turn and climb Kollata or not. This part of the trail goes to Montenegrin territory. You can decide on the way if you want to extend the trail to climb the peak or just go next to it. Your guide will be there to help you. The village of Cerrem is very small and it was creted from the summer shepherds camp when the border between Yugoslavia and Albania was closed.

You will walk between two shepherds villages which are inhabited only during the summer in order to use the abundant pastures. You will hike toward Doberdol to arrive to qafa e Borit then you will turn west to cross the border rto go to Vuthaj. The villagers of Cerrem and those of Vuthaj are cousins. Cerem was created in the early fities when villagers of Vuthaj came to use pastures in Albania and the state just blocked the borders and the summer pastures became permanent habitet of the villagers. This is a nive hike which includes walks in in the mountain crests and open patures. 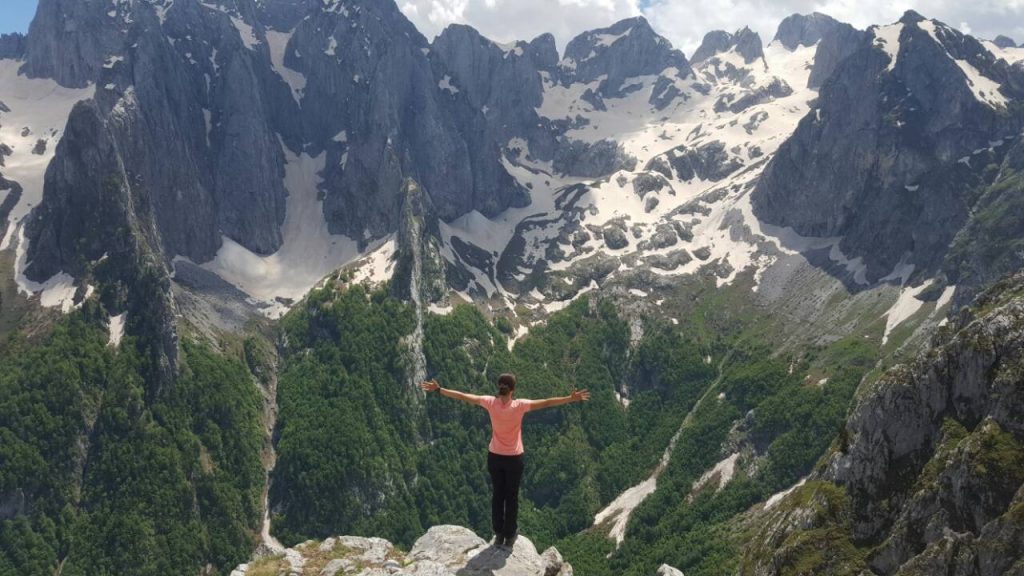 Gerbaja situated in Montenegro was considered as the most beautiful valley in Tito’s Yugoslavia home to now 7 independent states. Its a detour from classic Peaks of the Balkans. Your guide thinks that it is a pity this valley was left out of the classic Peaks of the Balkans. To start the hike you will take a 20 minutes transport. The hike will start witha climb in Taljanka peak a green heaven with a view on Karanfil a rough rock massive. Further the descent toward Lepushe will change the view from rocks to the mountain village valley living from sheep herding and agriculture which is now slowly substituted by tourism. This is one of the most northern village of Albania together with Vermosh. These villages have been hit by migration in the US. Some say there are more Lepusha villagers in New York than in Lepushe itself. The village looks traditional overwhelmed with rock houses called Kulla. From there you will take a transfer back to Plav.

We can provide a transfer by 4×4 from Vuthaj to Ropojane lake to cut a village road of the trail. This is where you will begin the 15 kilometre hike to the historic Albanian village of Theth. The path passes along the craggiest part of the Accursed mountains or Prokletje/Albanian Alps, which was a forbidden zone during the Communist era. In addition to the dramatic cliffs that form the backdrop for the day’s hike, you will also see a military bunker and the old border crossing signs as you cross into Albania. The hike finishes in the remote village of Theth, which is famous for its traditional way of life and stone houses.

The village of Theth is one of the most picturesque places in Northern Albania. Preserved by the wild nature and very bad roads, the village has still the kulla and other buildings dating back in middle ages.
The village is 100 per cent roman catholic, and has the most unique structure in the world Kulla e Ngujimit. This is a three story rock tower with no windows. It served as the self imposed exile for people who were involved in blood feuds.
You will spend this day walking in the village from the waterfalls and naturally created “bath-tubs” of the river Shala. This is a short relaxing walk full of culture and natural beauties. After lunch you will drive to Shkodra for a sleepover in a three star hotel.