The most determined visitor in Peaks of the Balkans!

Balkan Natural Adventure organized a trip in the Peaks of the Balkans for a group of Albanian friends living in Britain. The group was mixed concerning their fitness. Some were in great physical shape as good as an athlete, some were at their average shape and some were less than their perfect form. One, in particular, was equipped with determination instead of a sportive condition. Kreshnik Çela did not mind the effort or the limits he had to push, he made it in two of the longest hikes in the Peaks of the Balkans, regardless of fitness level. This is a story dedicated to those who ask about the difficulty in Peaks of the Balkans.

Knowing the diversity of the group, Balkan Natural Adventure organized the trip with two guides so there would be proper support for all. The trip went smoothly and here is the interview with probably the most determined hiker in the Peaks of the Balkans Mr. Kreshnik Çela. He describes himself like this: “I am overweight (clinically obese) and due to my day job of sitting for over 9 hours a day, I am very inactive”.

The guide Kushtrim Muriqi who walked with Kreshnik for the two hikes says that he has never accompanied a person with such dedication or size. “I was concerned for him just after meeting and seeing his physical shape. However, when I saw his dedication, I told him that we can do it together, he just needs to take one step at a time, control his breathing, and we will get through the mountains”. 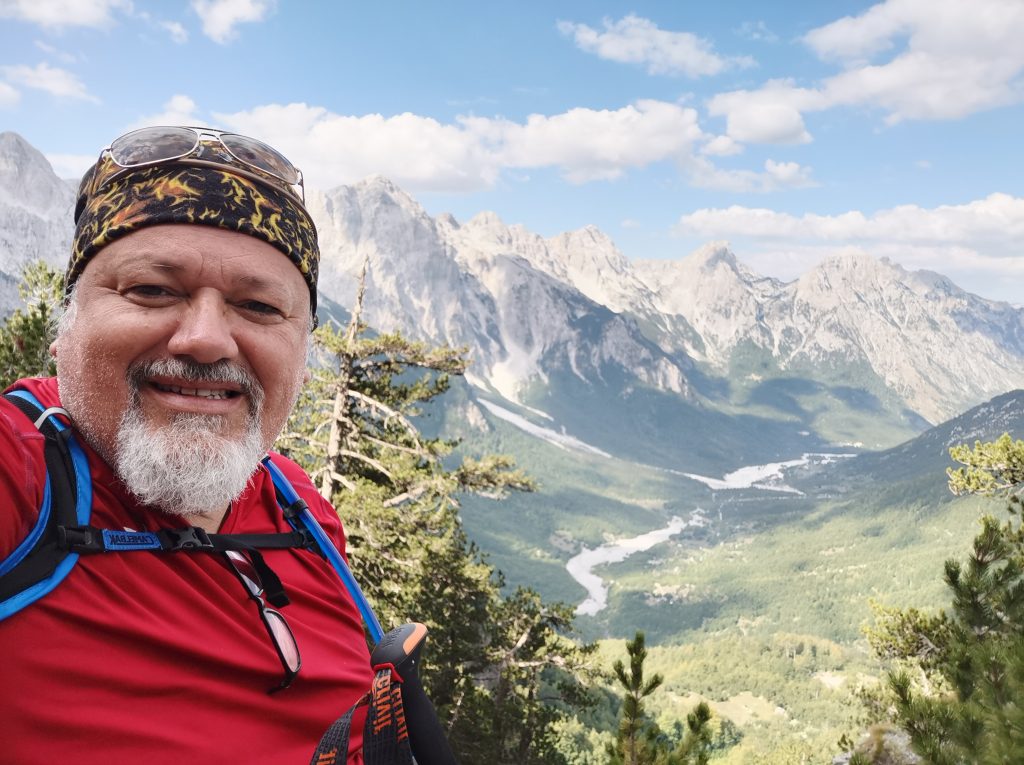 Which mountains/peaks did you climb on the Peaks of the Balkans?

Our group hiked from Lepushë to Vuthaj, but I personally skipped this part and then re-joined them from Vuthaj to Theth, and then from Theth to Valbone. So I had 2 days of hiking in total.

Whilst I was waiting for my group to complete Lepushë to Vuthaj, I was greeted by my host in Vuthaj, Gazmend Vucetaj who had been fantastic. His bungalows were adequate but his welcoming was spectacular. I got mesmerized by the view, fresh clean air, and his hospitality so I just sat there for hours daydreaming. I was served locally produced raki, some meze from local farms, the feta-cheese that his family produced. Met a lovely young couple from Israel who were also staying there. They were preparing a quinoa-based dish for themselves so I had to intervene and ask them to try some of the real local food 😉 I say this with a degree of pride that I consumed the entire bottle of raki there by myself. Needless to say, this didn’t bode well for my hike the next day.

Can you describe yourself physically?

I am overweight (clinically obese). Due to my day job of sitting for over 9 hours a day, I am very inactive.

How many people told you not to take the trip, because you will not be able to make it?

Actually, no one did! I think none of us had any idea of how challenging this was. This trip was organized initially for 2020. And I was determined to not only drop weight but also get physically fit in order to do it. Unfortunately, the Covid-19 situation developed and we had lock-down and all. I ended up even more in-active than ever before. And right to the day of travel, we thought the trip was going to get canceled. Luckily it didn’t, but the reality was that now I was ill-prepared for it.

How did the strongest advice against taking this hike sound, who made it? What did others think about the difficulty in Peaks of the Balkans?

After day 1, where I struggled a lot, mates in my group saw how exhausted I was and started talking to me about giving up on the Theth to Valbone hike and exploring alternatives on how to get there so that I could rejoin them. The biggest fear was if I was so slow that the nighttime would catch us in the mountain.

I decided not to listen to them and push myself to do it. I’m glad I did that.

What was the hardest part of the hike?

For me personally, the Vuthaj to Theth. This is because it was my first time hiking ever. And worst of all I tried to keep up with the group. Their pace was a higher tempo which my body wasn’t ready to endure and this quickly led to exhaustion. And I got exhausted in the first 30% of the trip. So I had to drag my back-side for the next 70%.

The final leg of Vuthaj to Theth was a long steep downhill. Which is longer than I could have ever imagined. By this point, I was way beyond exhaustion but I also ran out of water. By the time I reached the café leading into Theth, I was dehydrated too.

Nevertheless, the euphoria took over and the sense of achievement coupled with the tremendous natural beauty of the mountains made me feel special.

How did you feel during the hike?

Awesome, particularly the 2nd day. As I was able to apply the lessons I learned from the 1st day and started hiking at my pace. Going at the speed that my body was able to. The two guides from Peak of the Balkans were fantastic. Always there for me, guiding, encouraging. Esad was there with me on the 1st day where he did his best to help. He even carried my rucksack. And then Kushtrim on the 2nd day making sure I was going at a good pace, motivating, guiding, chatting to me all the time, and really making sure that I also take in the scenery and enjoy it fully. They were knowledgeable professionals who were a god-sent for novices like me.

The 2nd-day route, Theth to Valbone, was far more frequented so we were seeing people all the time. It was amazing to see the camaraderie of these people who were complete strangers. Foreign nationals from everywhere in the world – not only greeting us but offering words of encouragement too. Some of them even congratulated me on taking this hike, others commented on how I am an inspiration and some even took photos of me to show to their loved ones who were afraid to take the trip because of their poor fitness.

I’m already planning to do the same trip with my family. This trip is not only amazing for your senses, as the beauty of these mountains is mesmerizing, but is also such an active and detoxifying way to spend your vacation. I have been inspired to not only get fitter to repeat this trip again but also make hiking part of my holiday calendar. There’s something special about walking in the mountains, in fresh clean air, in the most stunning natural setting whilst getting a good workout. 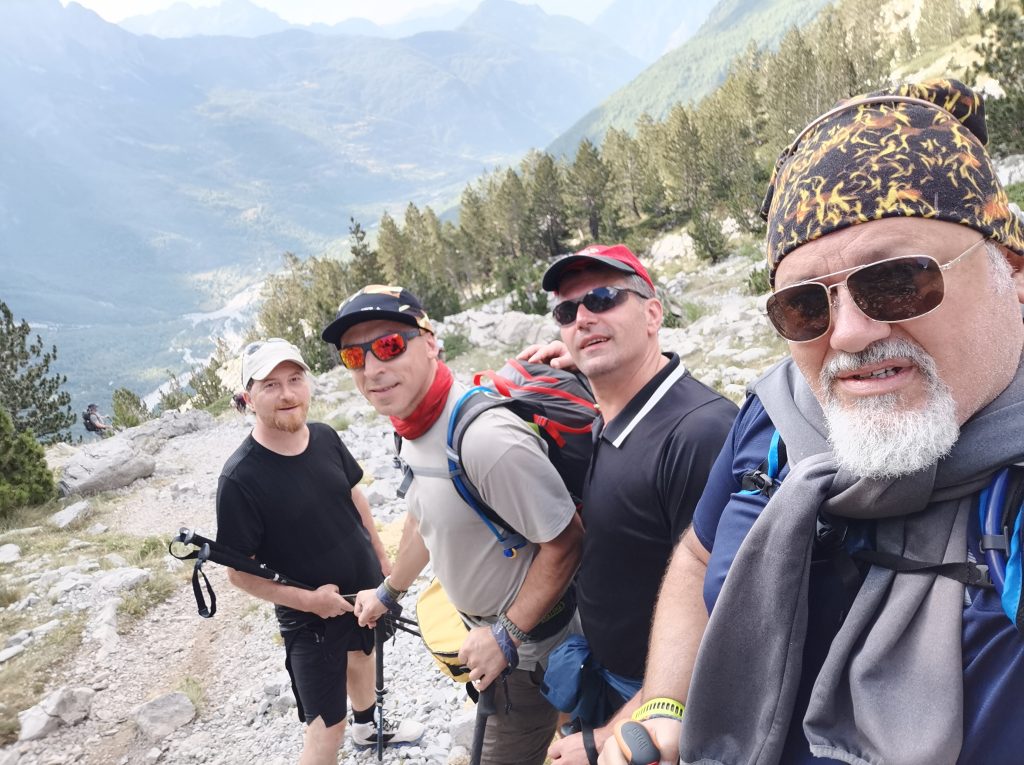